When it comes to maintenance of bee equipment, all beekeepers agree that replacing contaminated hives can be a very costly exercise.

There have been many techniques tried and tested over the years, in an attempt to find the ultimate solution to control disease and insect contamination.

Out of all the different techniques tried, Gamma Irradiation stands alone in offering the most effective method of eliminating pathogens and insects from contaminated equipment.

Steritech NSW now offers the new Steritech Bee Carton to make it even easier to prepare your equipment for treatment.

How did Gamma Irradiation become a treatment for Bee Equipment?

It was towards the end of 1982 that a large outbreak of AFB was detected.

Rather than burn the hives, about 1,400 boxes (including frames) were irradiated by Steritech. This was the first commercial irradiation of bee boxes in the world and was reported in the American Bee Journal:

Hornitzky MAZ and White B (1983 – September) The Commercial Application of Gamma Radiation in the Control of American Foulbrood American Bee Journal 123(9): 652-653.

Since this first consignment came through its irradiation plant, Steritech has provided Gamma Irradiation treatment to hundreds of thousands of beehives, without issue. The process is recognised by the all State Departments of Primary Industry (DPI) as a proven treatment for elimination of AFB and EFB. 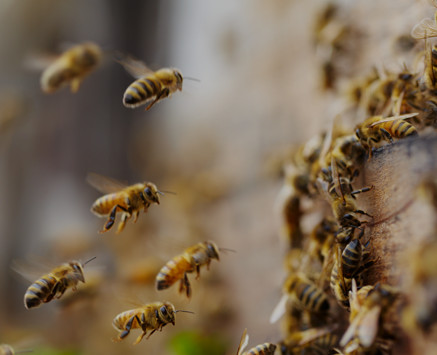 What happens during the treatment process?

The bee equipment remains in the irradiation chamber for a specified period of time to ensure the required dose of irradiation is applied.  During this time, the gamma rays penetrate all areas of the bee equipment.  Chemical treatments may not reach every area of the equipment which is why irradiation is so trusted.  A minimum dose of 15 kilogray (kGy) is used to treat bee equipment. which eliminates all disease, mould and insects and pests.  Note that timber hives can be treated as many times as required.  However, polypropylene equipment can become brittle at doses higher than 30kGy.